In the beginning there were Vic and Joe. Vic had been performing at the Kansas City Renaissance Festival since 1982 – first as the guitarist for the Mary Kay dancers (maypole dancers, for those who don’t remember names), and later as a solo troubador. I had been at festival since 1977, beginning by running chess tournaments for the Festival, then working in the chess booth, then as court musician, then as an actor, and finally as court musician again. We performed together at the Musicians’ Jam at the end of the day (the forunner of the Pub Sing).

When Vic mentioned that he was going to play at a small one-weekend festival at Kansas Newman College in Wichita, I invited myself along. We worked up duet arrangements of some of the standard Faire songs, plus a few new ones and went down. My first out-of-town festival – the last weekend of May, 1987.

We had so much fun we went to the Renaissance Faire of the Midlands at Council Bluffs, Iowa in early June. There Richelle sang with us as we introduced what was to be our first “hit” – The Blooming Heather. Actually, Richelle was one of about ten people that performed it with us. It immediately became the closing song.

A few weeks later, we travelled to Colorado with the Mary Kay dancers to perform at the Colorado Renaissance Festival. Richelle was there with her then husband, Dwayne, but was not under contract. She sat in with us while we did our old faire favorites (Wild Rover, Gilgarra Mountain, Johnny Booger, and of course our new favorite – Blooming Heather). We clicked. People asked what our name was and being the imaginative crew that we were, we looked at each other in bemusement (Richelle was standing in the middle for that show) and said, “Maid in the Middle”. The name stuck, although we changed the spelling to make it look more Olde English, since we were heavily into renaissance faires.

The entertainment director of the Colorado Festival heard us in the lanes and offered us a contract (for a mere pittance, I might add). We were absolutely thrilled and accepted, and came back twice more before the end of the season (which was all we could afford – the contract just barely paid expenses). And so an act was born.

Over the three years Vic, Richelle and I performed together as Maid in the Myddle, we played the Colorado Renaissance Festival, the Kansas City Renaissance Festival, Scarborough Faire in Dallas, the Kansas Newman Renaissance Faire in Wichita, the Renaissance Faire of the Midlands in Council Bluffs, My Waterloo Days in Waterloo, Iowa, and the Wassail Feast. We also performed regularly at Kangaroo and Kiwi, Too – a small bar in Kansas City – until it closed. We then moved to Murphy’s Landing, until it, too, closed. We played schools gigs (Stilwell Elementary being a yearly event), played on the Plaza during their summer season, and various private parties. We made two albums together – Merry Olde Inn in 1988 and Soldier Sailor in 1989.

Richelle retired from the group at the beginning of January, 1990, to pursue her dream of becoming a firefighter (which she has since achieved). Vic followed her into retirement about a week later. This was a difficult time, since we were under contract with the Arizona Renaissance Festival beginning the second week of February, 1990. Thus ended the first incarnation of Maid in the Myddle.

On to the Second Incarnation… 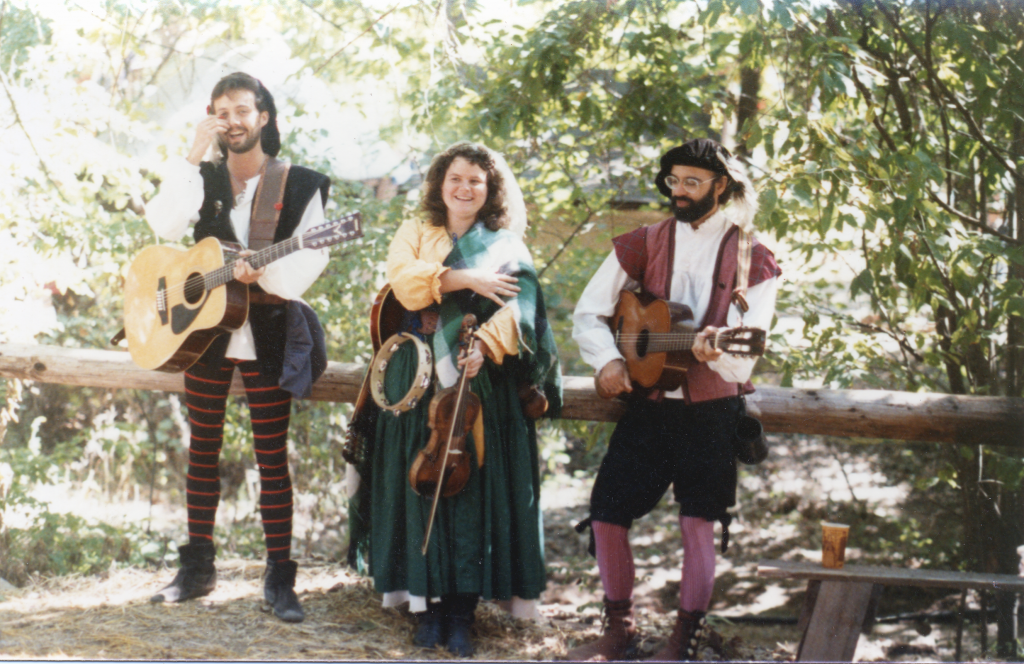 Playing in the lanes at the KC Festival in 1987. 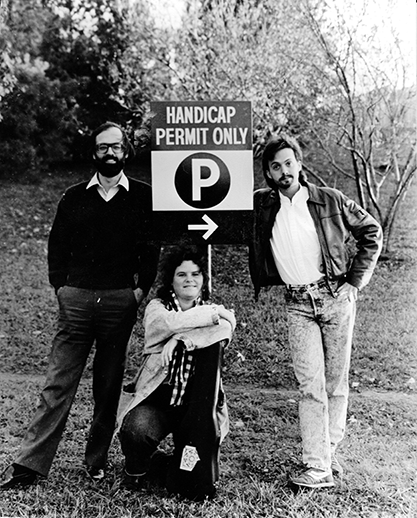 One of our first publicty photos. We replaced the sign with our logo on the publicity materials, but the original shows more of the spirit of the group. 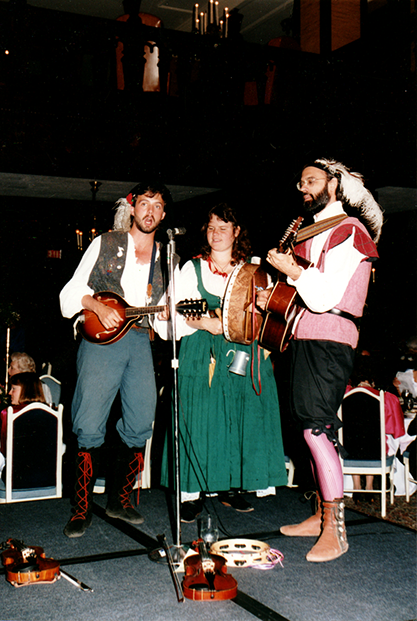 Performing at the Wassail Feast, probably in November of 1988 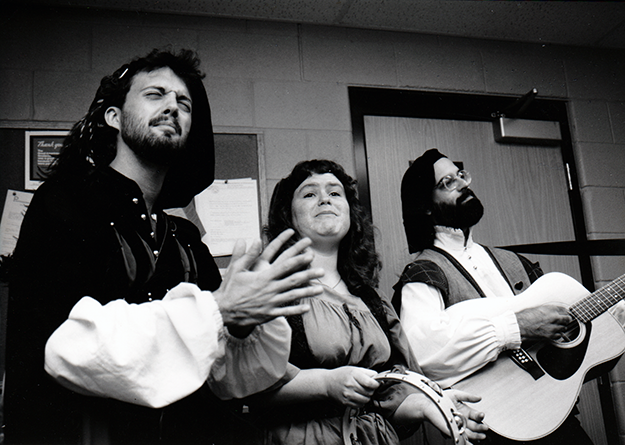 A close up from our first school gig at Stilwell Elementary in the Blue Valley School District. Spring 1988. 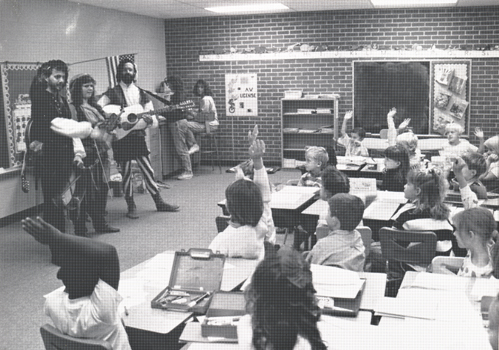 A long shot from the same gig. 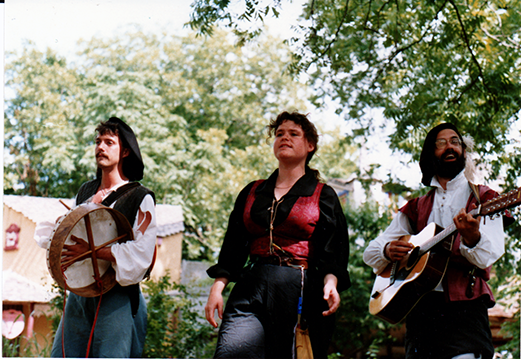 Once again in the lanes of Scarborough Faire. May 1989. 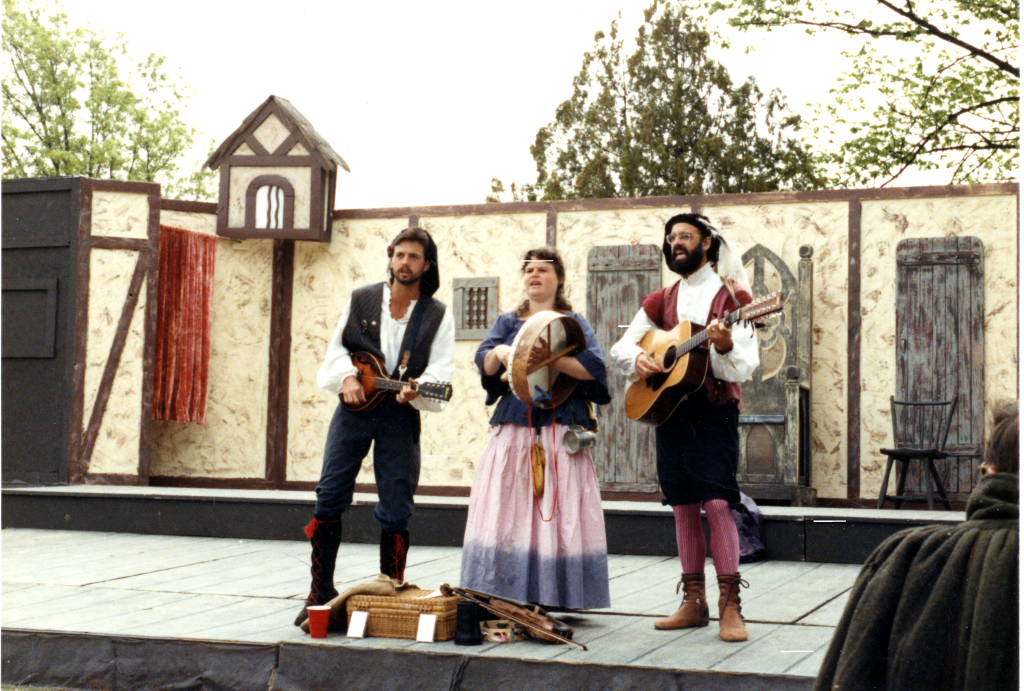 One of our Colorado Renaissance Festival stage shows in 1989. 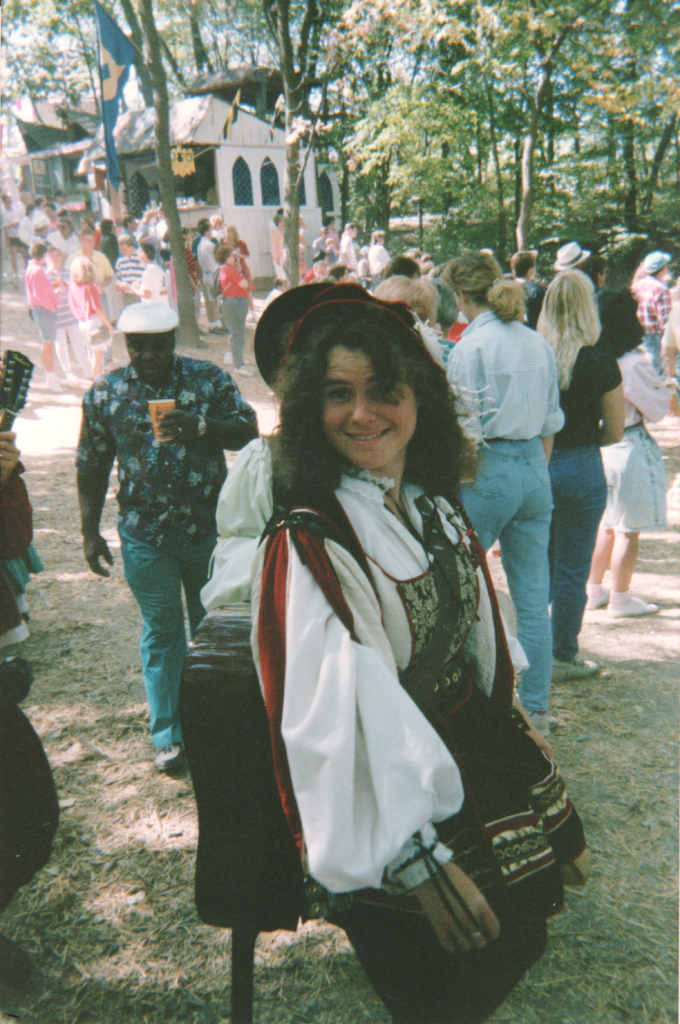 Richelle in Kansas City, September of 1989. 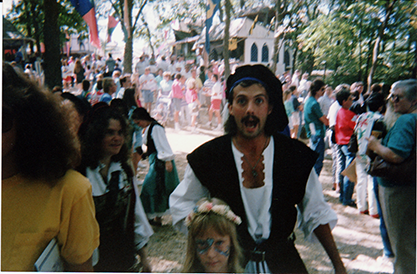 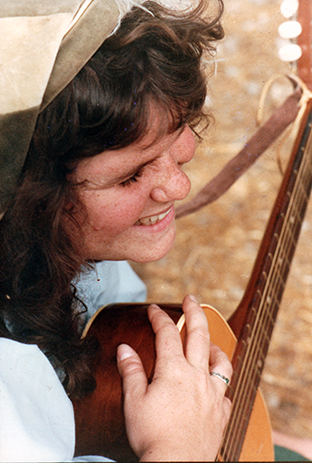 Richelle with her guitar at the Kansas City Renaissance Festival - date and place unknown. 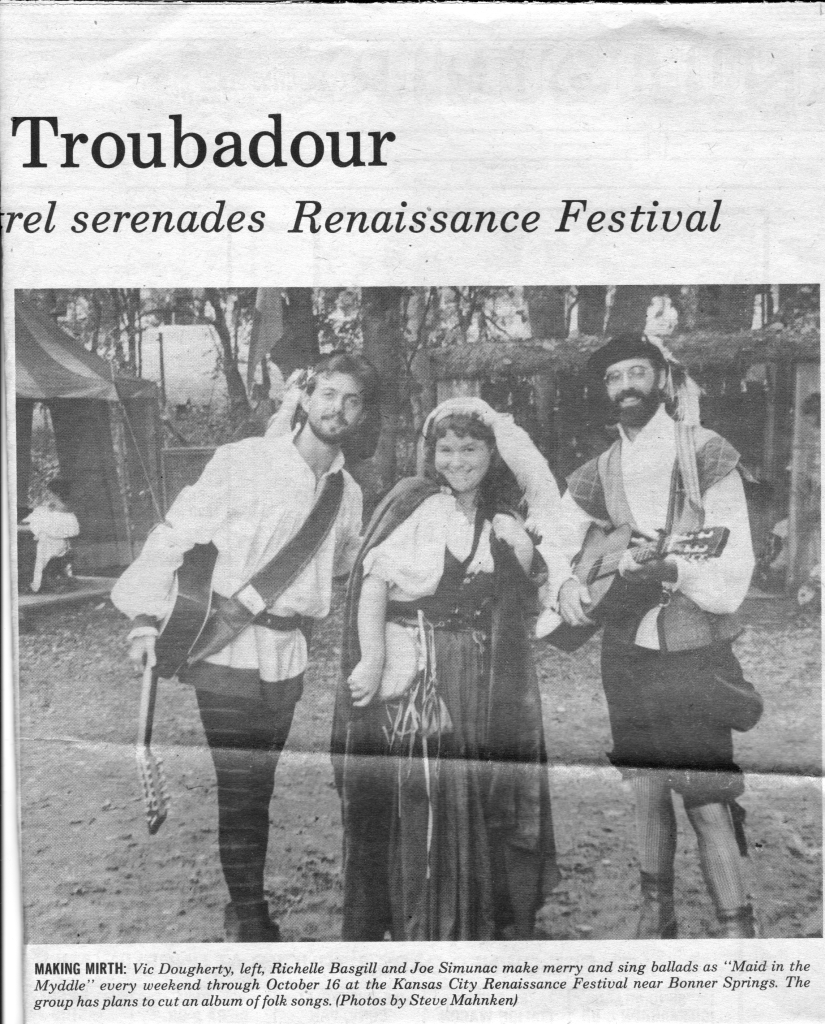 A newspaper article about us from 1987.