Jonathan blended in nicely Mary and myself. We did all our normal faires and the Dickens Festival in KC. We added new songs to our repertoire. I decided to record another solo album, which became Mirror of Youth. It was recorded from November 1992 through January 1993. Most of it was just me and Lee, but I decided to end the album with Bring on the Starlight, a favorite ending song at many festivals. I managed to get both of the first two incarnations back together, plus Shelley, for the vocals. It was lots of fun.

Mary finally tired of all the travelling in early 1994 and decided to quit. I wasn’t quite ready to fold up yet – we still had contracts for some of our shows. But we needed a new Maid. I asked Jamie Barker, an alto from the KC apprentice program, which I also ran. She had heard us perform many times and was happy to join. She was an amazing performer and picked up pennywhistle and bodhran in short order. She already played recorder quite well. But the sad thing was we didn’t have a contract for KC that year. Instead, they hired (at a much reduced price) Musica Ficta – an offshoot of the apprentice program consisting of Korey Ireland, Jamie, Valerie Thompson and myself. We played real Renaissance music, not Celtic. It was probably good that Maid in the Myddle was not hired, as we were not quite ready yet. We did play one weekend at KC and did quite well. Plus we had the Dickens Festival coming up in December.

One of the most interesting gigs we ever performed was for a Christmas party in an antique store in Brookside in 1994. We were scheduled to play for two hours. The hosts didn’t want Christmas music, just our normal fare. After two hours the party was still going strong and the hosts asked if we could keep playing (for extra pay, of course). No problem. We had plenty of songs left. At that point we thought we’d see just how long we could go without repeating a song. The party kept going and so did we. It finally ended after more than four hours and we still had not repeated a song. It was quite impressive, although we really were scraping the bottom of the barrel by the end.

Jonathan decided during the Dickens Festival that he had had enough. He really wanted a solo career and we didn’t have enough gigs for him. I’m just sorry that we never got to record with Jonathan. Once again, I wasn’t quite ready to hang it up, so the search began for another tenor. Thus ended the third incarnation of Maid in the Myddle.

On to the Fourth Incarnation… 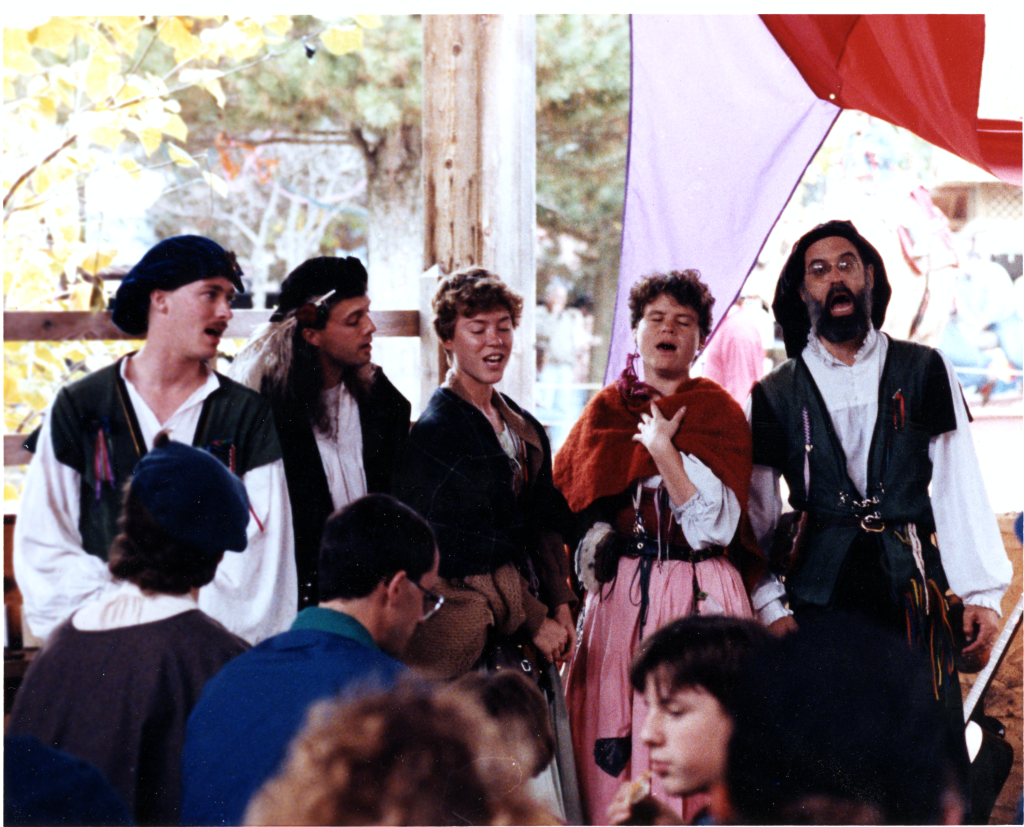 A performance in the Pub in Kansas City on a cold or wet day - we always moved inside whenever conditions warranted it. Vic and Richelle joined us. We were probably performing I'll Lay Ye Down Love (recorded on With Love), since that was the a capella song we most often performed together. Also 1993. 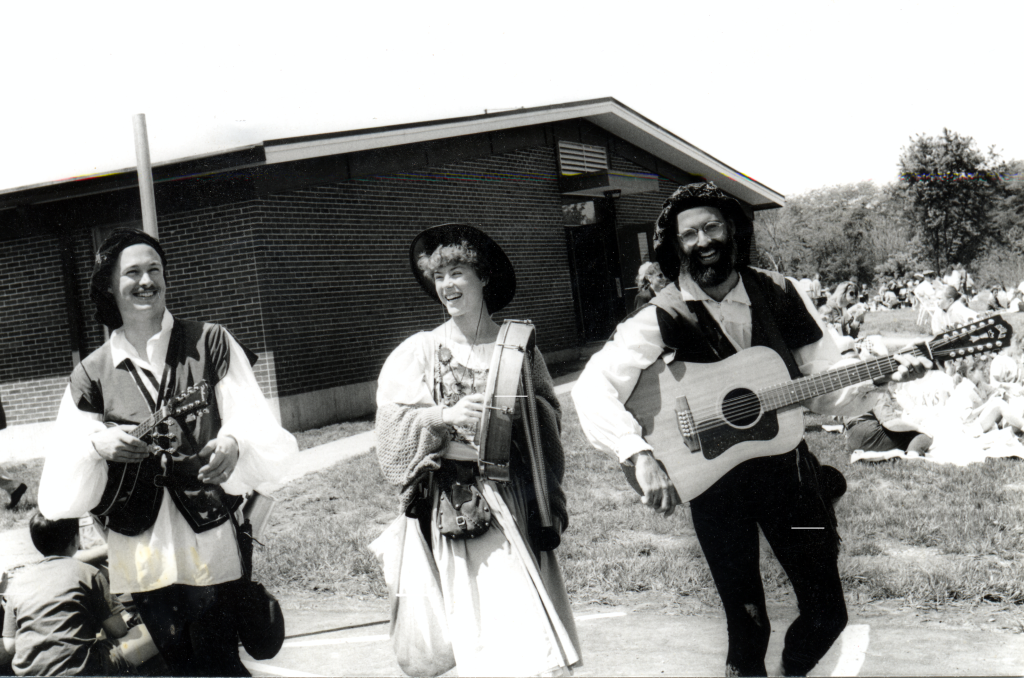 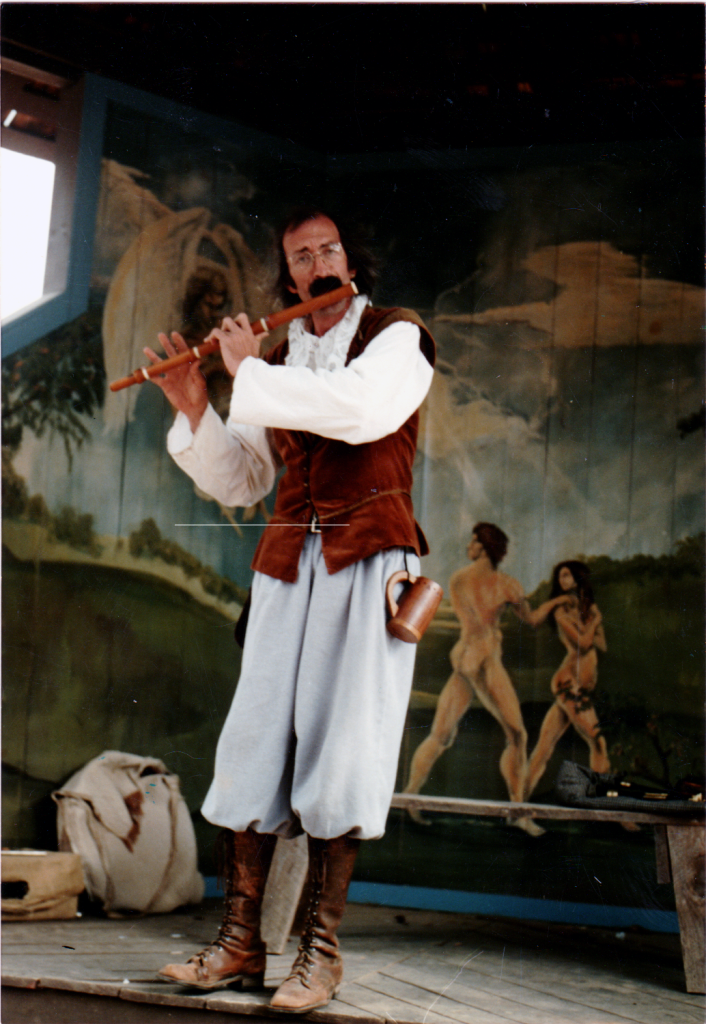 Our good friend Lee Worman, doing his solo show on the Kansas City Pub Stage, 1993. Lee produced my first solo tape, Rattlin' Roarin', and the extra cuts on our With Love CD, as well as Argosy (with the Jolly Rogers). 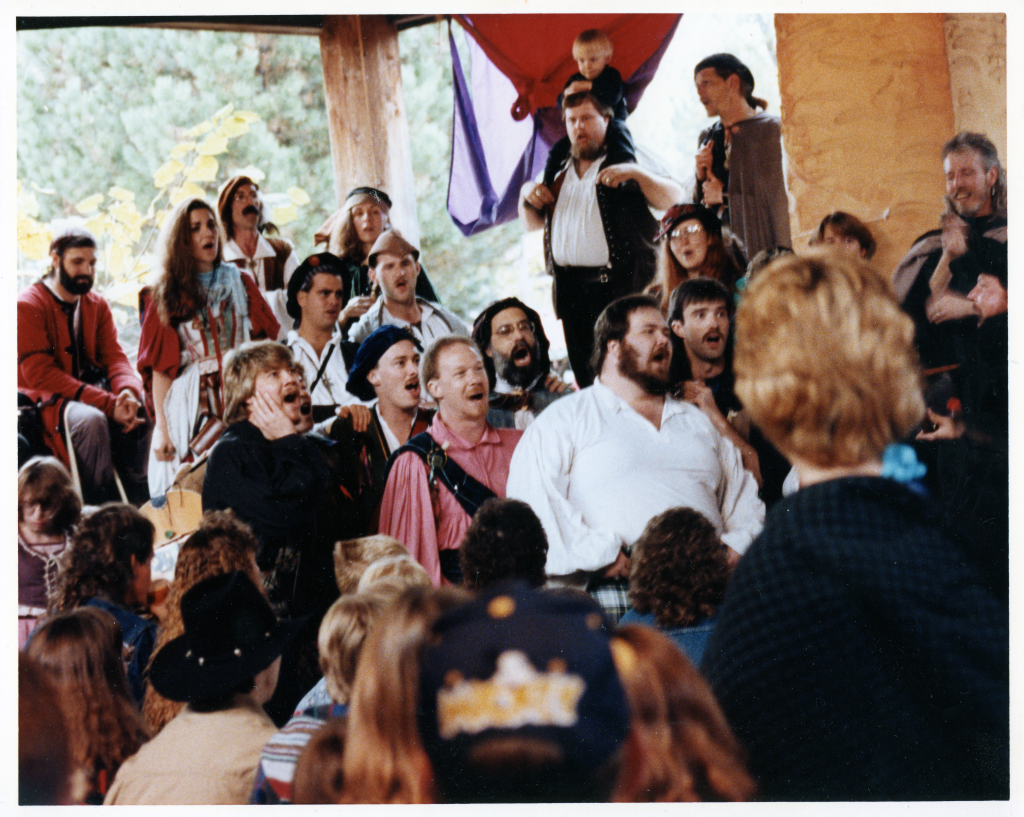 Performing Northwest Passage (led by Frank Blair) at the KCRF Pub Sing in 1992. 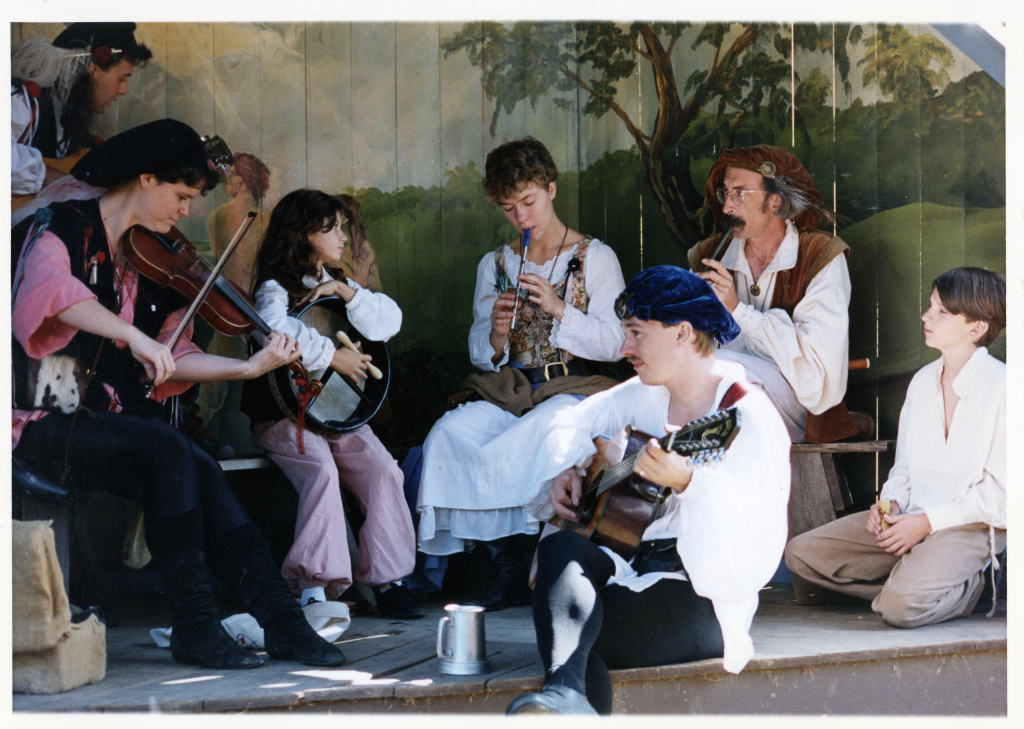 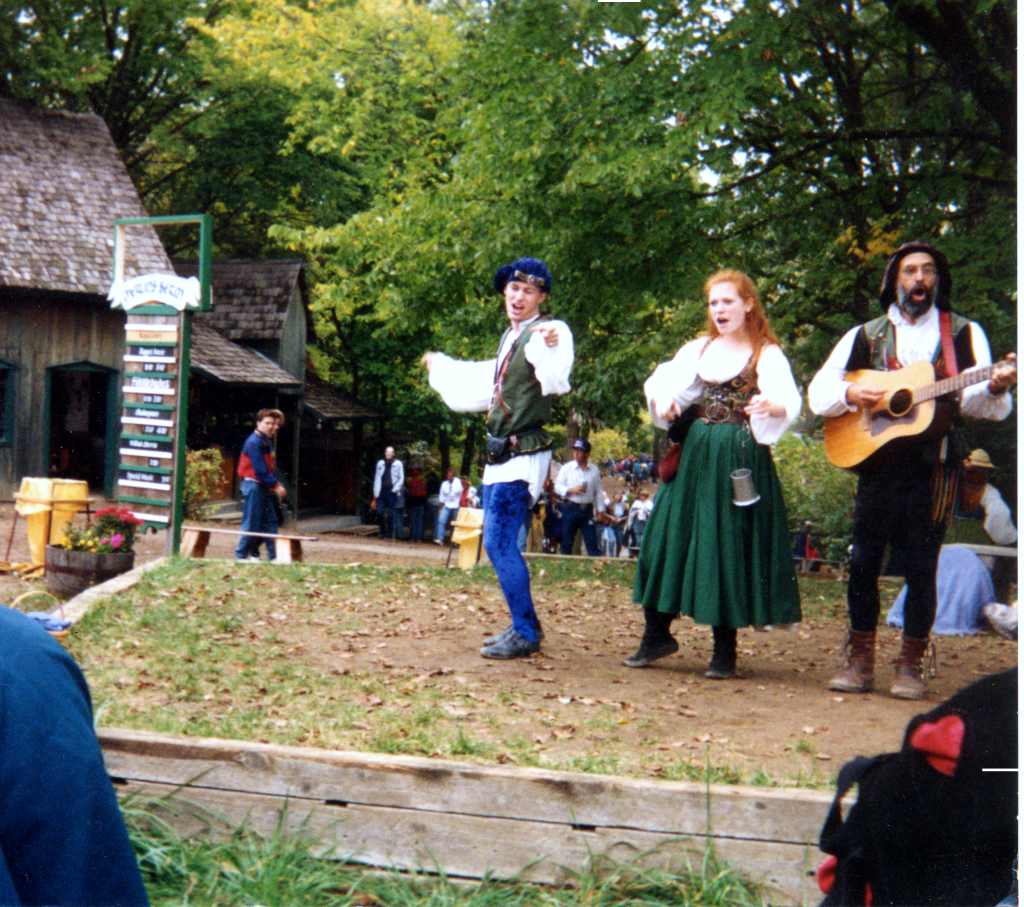 One of the few pictures of the 3 1/2 version of Maid in the Myddle - before Jonathan left and Beau took over. Singing St. Brendan's Fair Isle at KCRF in 1995. 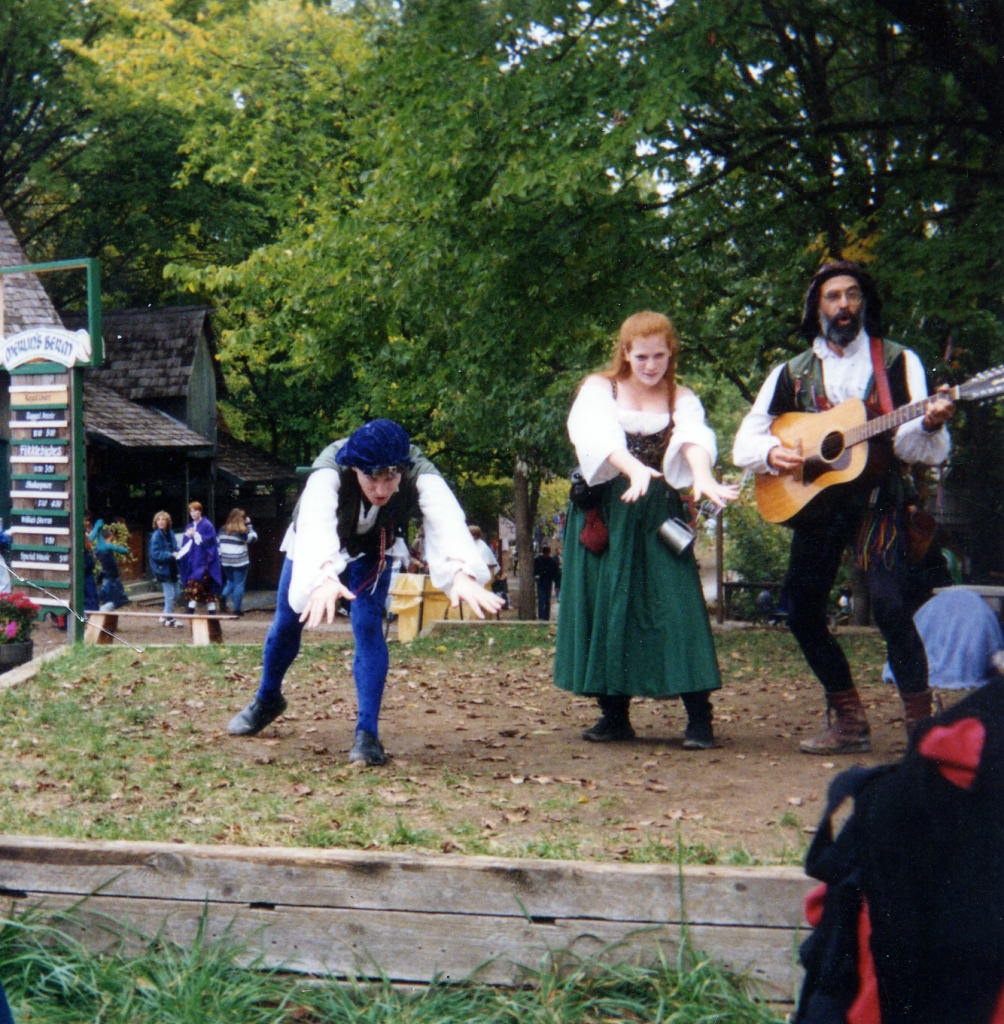