There was only a month from Richelle’s retirement to the opening of the Arizona Renaissance Festival. Maid in the Myddle was under contract, and I didn’t want to break it, so I started calling. One of the first people I called was an old friend, Mary Strobl, the alto with the Dotty Minstrels, who had performed at the KC Renaissance Festival in 1984. She auditioned and was perfect. At that time, she only had a part-time job, which made her doubly perfect, since we were going to start travelling in only a month. About a week later, we auditioned Mark Clavey, a solo performer in KC, to replace Vic. Mark was more of a high baritone than a tenor, but his voice blended beautifully with Mary and I. And so the second incarnation of Maid in the Myddle was formed.

We rehearsed at a frantic pace. With Richelle gone I had to pick up the fiddle, which I had played only sparingly up to that point. Mark and Mary had to learn all the arrangements and we had to work out a decent act. We got it done, but the first few weeks in Arizona were definitely a learning experience. Terry Foy, the entertainment director, was very understanding of our situation, which made things a bit easier for us. We also developed a following, since most people in Arizona had never heard a group like ours.

After Arizona, we were booked for three weeks at Murphy’s Landing, an Irish pub in downtown Kansas City (since closed). This was probably the lowest point for the group. We played the first weekend, but the management was expecting Vic and Richelle, who were polished performers. While the new incarnation was just as good musically, the show was definitely not smooth. We did not come back for the last two weeks, and instead decided to record another album – With Love. Mike Dugger of Scartaglen, who had produced Soldier, Sailor, agreed to produce this album also. It was difficult, since Mark and Mary had never been in the studio, but we came through with a fine product and a much better understanding of our group dynamics.

A few weeks after finishing With Love we performed at the Kansas Newman Renaissance Faire in Wichita and were a huge success. The work we had put in on the tape came out in our shows, which were much more polished. The energy we showed there guaranteed we would be back in Kansas City in the fall, even without Vic and Richelle.

We were a great hit at Kansas City in the fall of 1990. Mark had a following from his years as a solo performer, and of course we had the standard Maid in the Myddle crowd who wanted to see how the new group would work. Our next year at Arizona (1991) just continued our success – we were a much better group than we had been the first year there. In October of 1991, we participated in a unique project at the Kansas City faire. Garold Amadon (Gibbon the Troubador) and Scot Hendricks (Axel the Sot) brought in recording equipment to work on a live album. It was decided that all the groups performing at the Pub could participate. We recorded all of our shows on October 13. Almost two years later we released selected cuts from those live recordings as Maid Live (1993). The recording quality left much to be desired (of course), but the performances themselves were quite good. Unfortunately, I’ve lost all copies of this tape. If anyone as one, please contact me, as I would love to get it converted to CD.

More recording projects were in the air. I had wanted to record a solo album of fiddle tunes for quite a while. Glenn Major, our engineer at Alpha Music Studios, was more than willing, but wanted to wait until he got his new 16-track recorder installed. The full story is on the Rattlin’, Roarin’ page. Needless to say, it ended up being quite a time crunch. To begin with, we decided to release With Love as a CD. Now I, for one, object to buying CDs with not all that much music on them. Since the original With Love tape was only about 40 minutes, we decided to record some more tracks for the CD. The first one we did was The Mingulay Boat Song. The Jolly Rogers had introduced it at KC the previous year during the Pub Sings and it was quite popular. We added the Maid in the Myddle touch – modifying harmonies, adding backup instrumentation, etc. – and recorded it with the Jolly Rogers and Richelle in December of 1991. The sessions went so well that we decided to do a collaborative tape.

So we went into the studio to record six more tracks (seven counting Mingulay) for With Love, all the tracks for Argosy (the joint album), and I also recorded Rattlin’, Roarin’ at the same time. It was a rather stressful time, needless to say. That was a lot of recording to get done in one month. We wanted to finish everything before we went to Arizona in February. We did get it all done and I think the results speak for themselves – all the tapes were quite good. Not perfect, of course. A little more time and we could probably have fixed up a few of the weak patches. Ah well, hindsight.

Also at this time were the first signs of trouble with the group. It started on our trip back to KC after the first week of Arizona. We hit a blizzard just outside of Phoenix and followed it all the way to KC. Our trip that normally took 17-18 hours took 28 instead. Tempers were frayed. One of the big sticking points in the group was the direction we wanted to go. All of us really wanted to devote full time to Maid in the Myddle and music in general. But that would mean quitting our jobs and taking the plunge. I was not willing to do that just yet. Mark was ready. By the time Scarborough Faire rolled around things were almost at a breaking point. It was obvious that Mark was not happy and was ready to bolt the group and start a solo career. So we needed to find a new tenor fast. But we also had to do it without Mark finding out or he would have quit on the spot, and we were in the middle of a contract with Scarborough. Touchy.

We started auditioning tenors during the week and finally found Jonathan Wenski (now going by his stage name of Jonathan Ramsey). He had a very nice voice, played guitar well and knew many of the songs, although not our arrangements. Mary could not be there much of the time, so we rehearsed with Shelley Franklin, who had filled in for us once when Richelle couldn’t make a gig. We actually did a split performance on one weekend. Mark and Mary performed in Scarborough while Jonathan, Shelley and I (along with Lee Worman) performed at the Kansas Newman festival in Wichita.

Mark did quit after Scarborough, so Jonathan was our new tenor. On to the Third Incarnation… 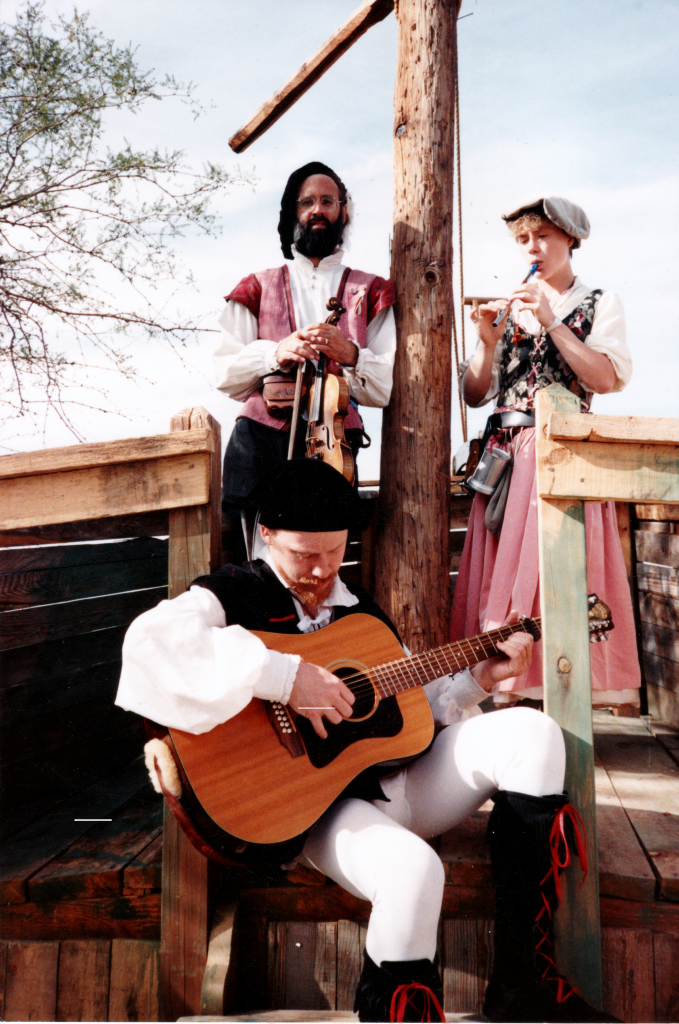 The second coming of Maid in the Myddle at our very first gig - the Arizona Renaissance Festival. This was taken in March of 1990 at the Edge of the World stage. Even though we had only played together for a month, we were invited back. 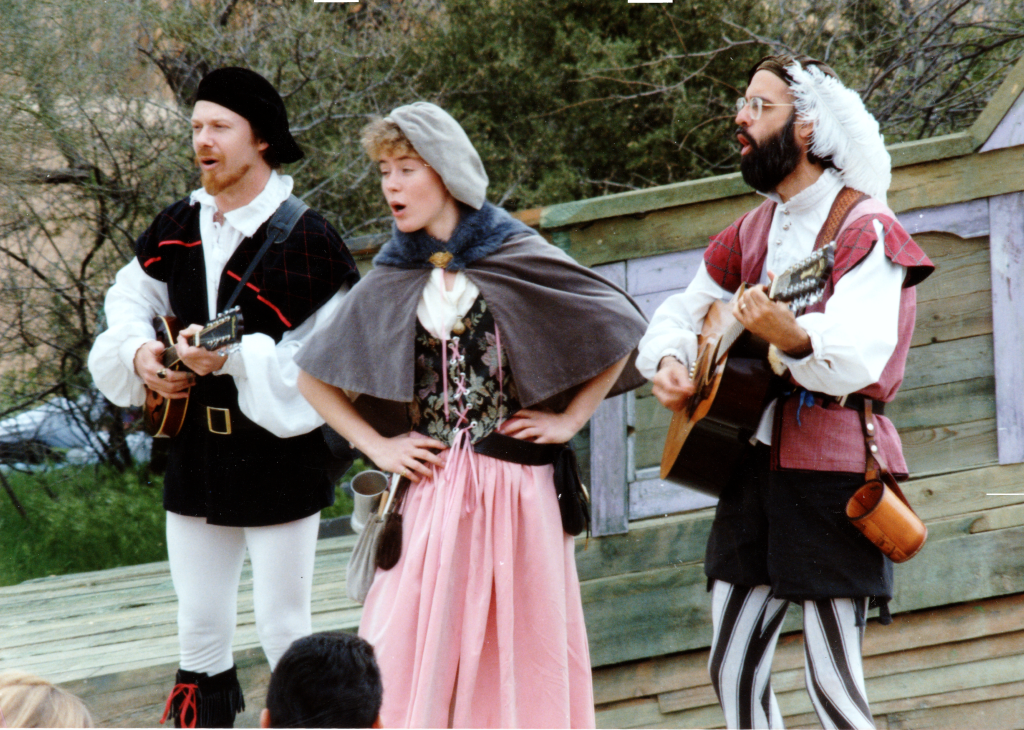 Performing on the Edge of the World stage in Arizona in 1990. 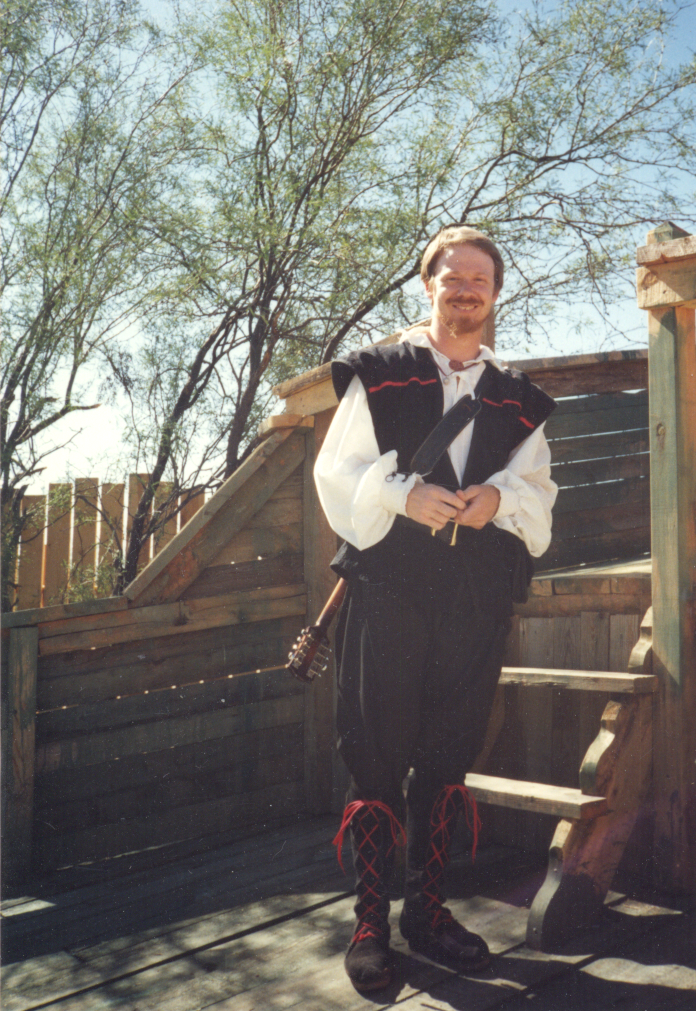 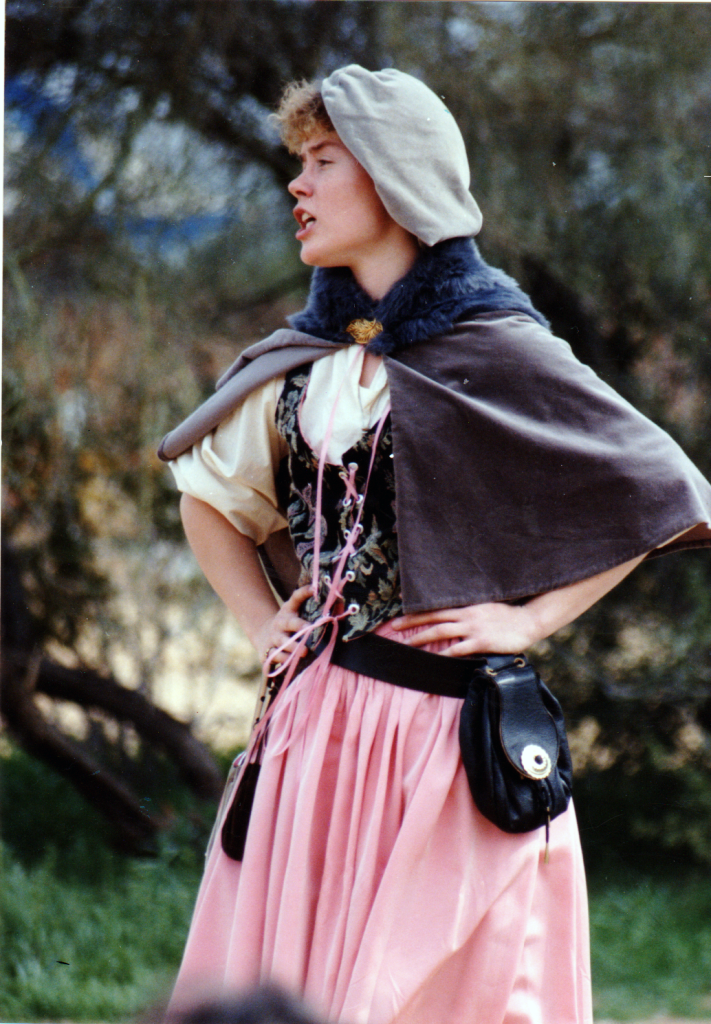 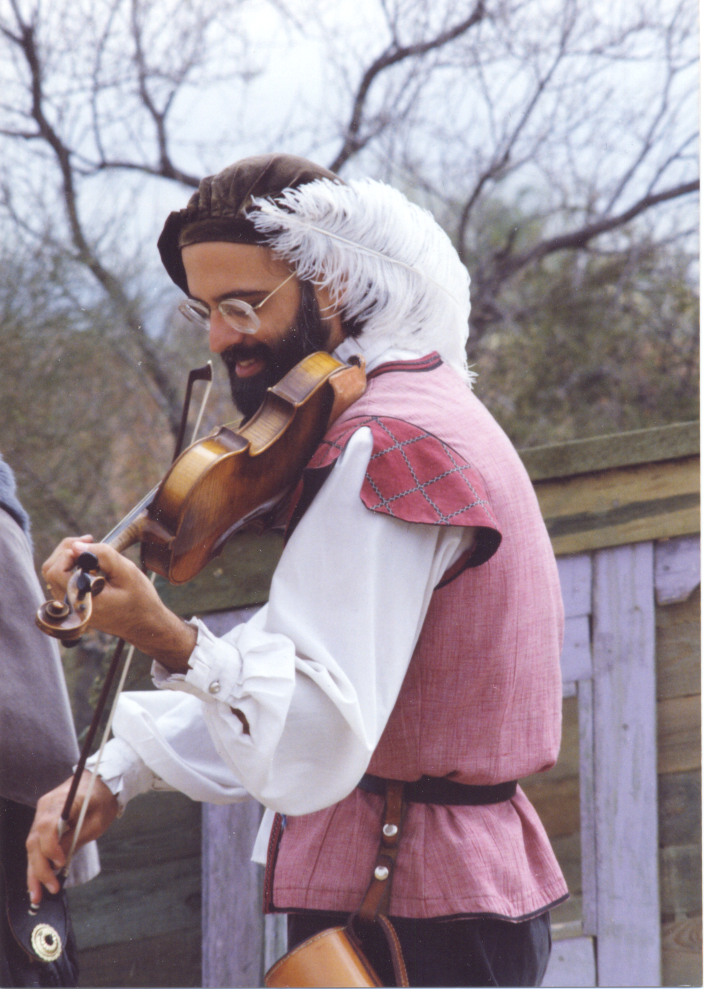 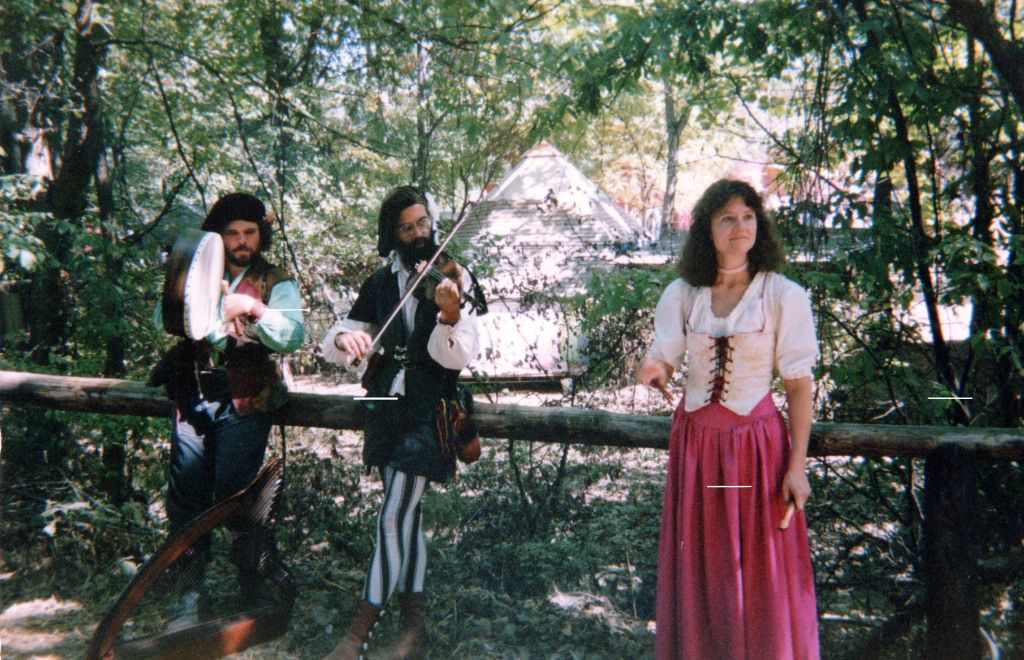 Me playing on the bridge on the West Road (one of my favorite places to do a solo show) at the Kansas City Renaissance Festival of 1993. With me are James Excel and Julie Elgin of Boxty, a Celtic trio that we met in Colorado. 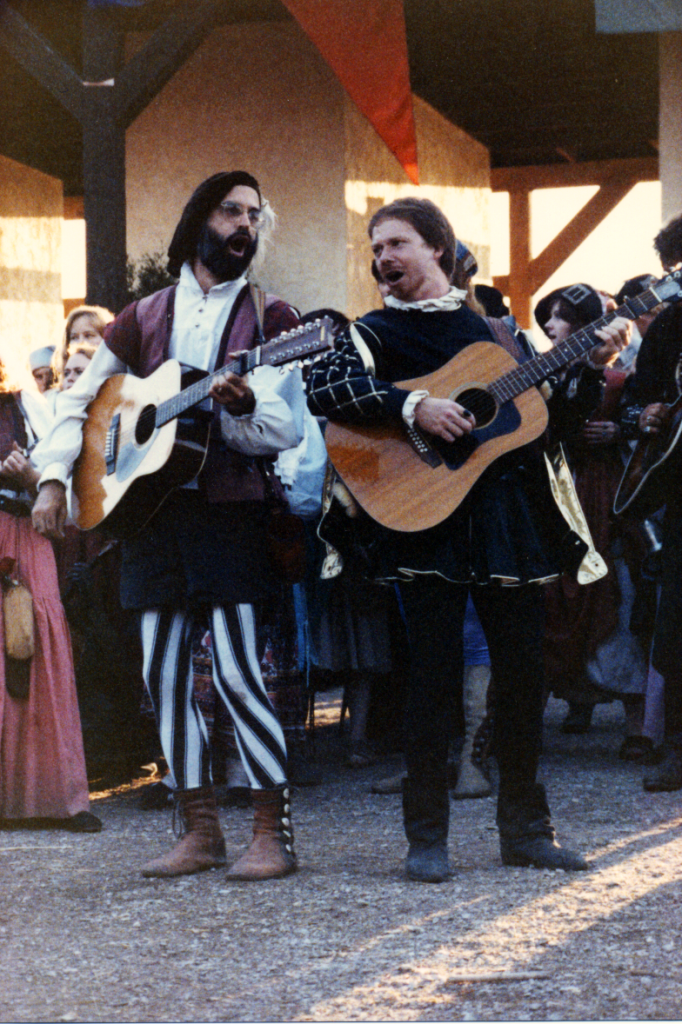 Mark and Joe at the KCRF front gate at the end of the day. Probably 1990. 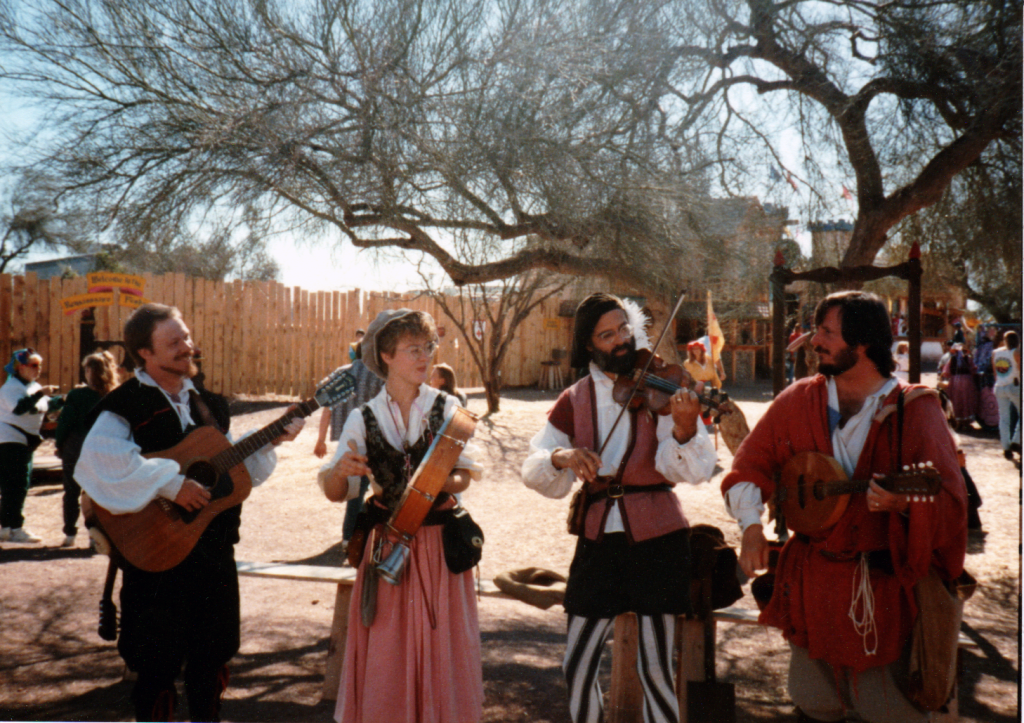 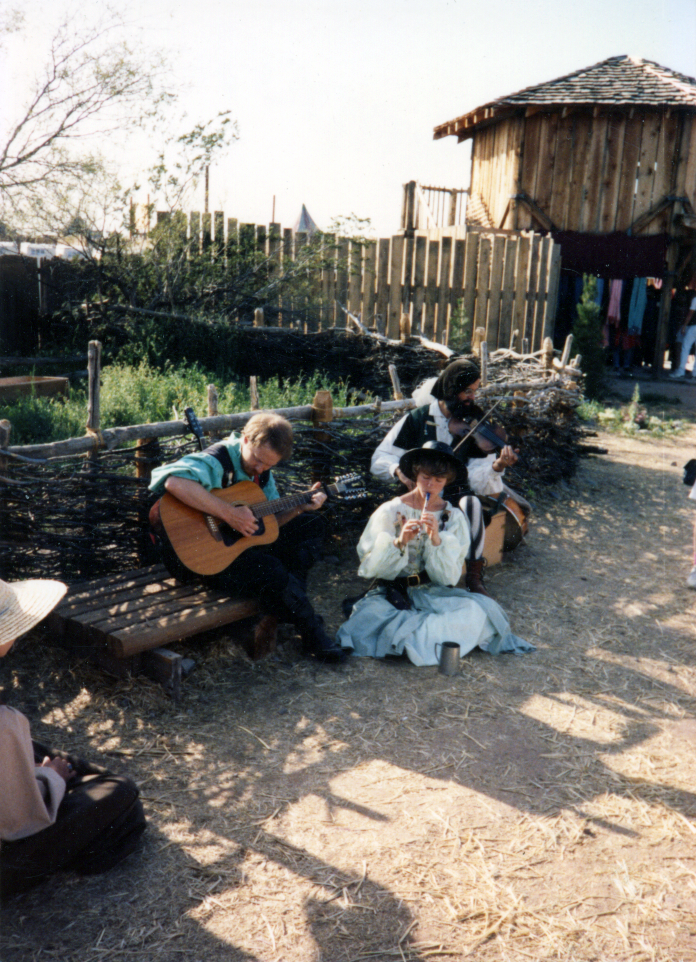 Arizona in 1992. One of our favorite places to relax and play. 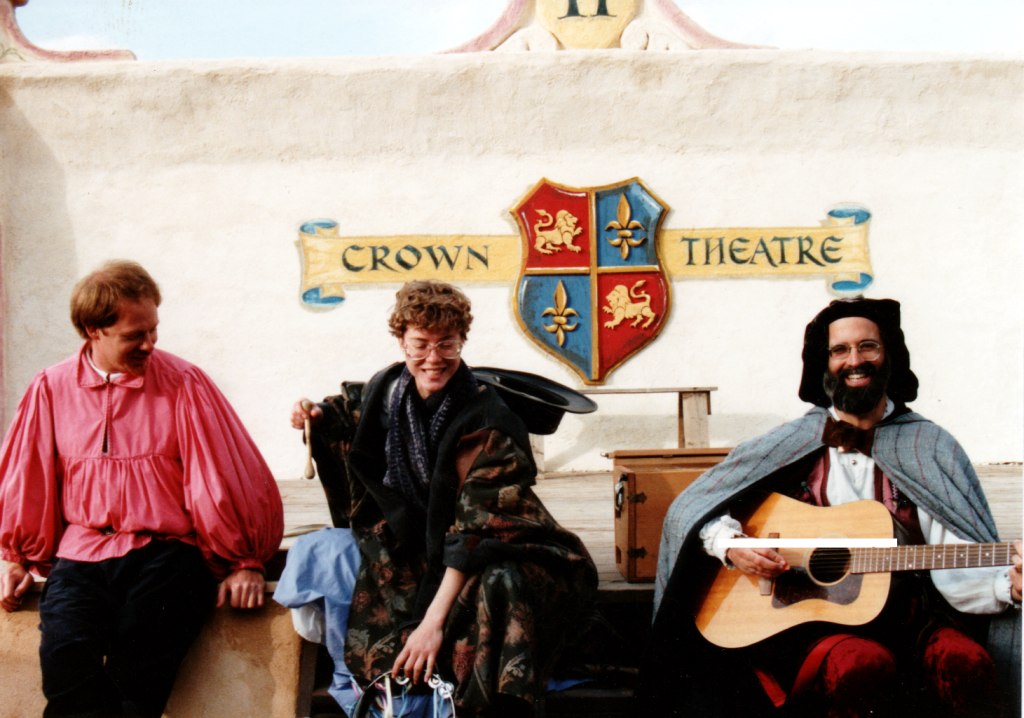 One of our all-request shows at the end of the day at the Arizona Renaissance Festival in 1992. 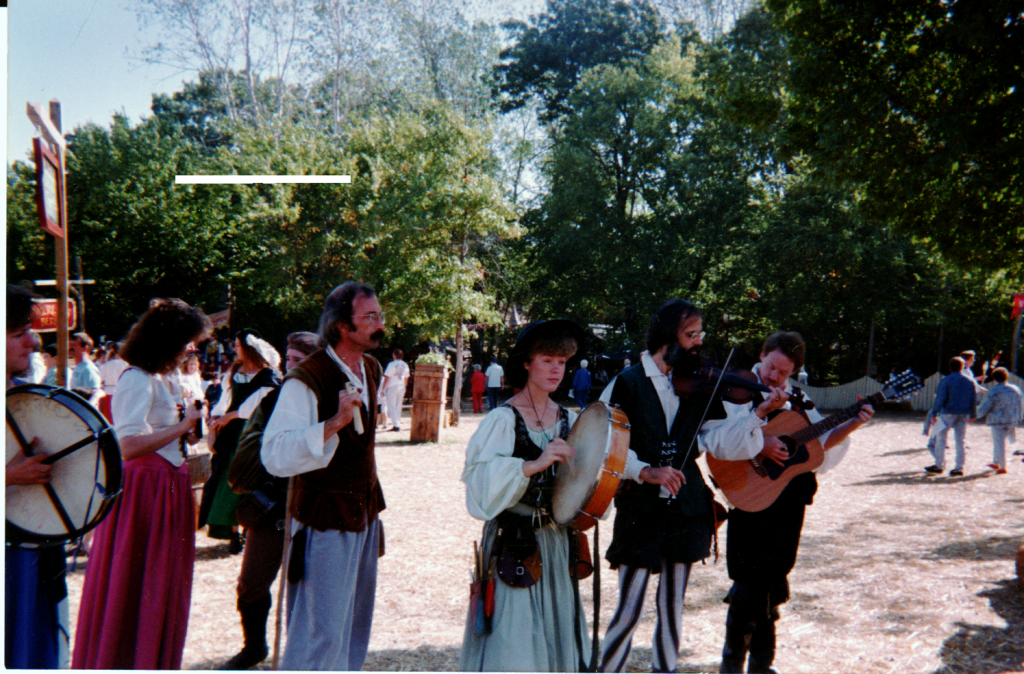 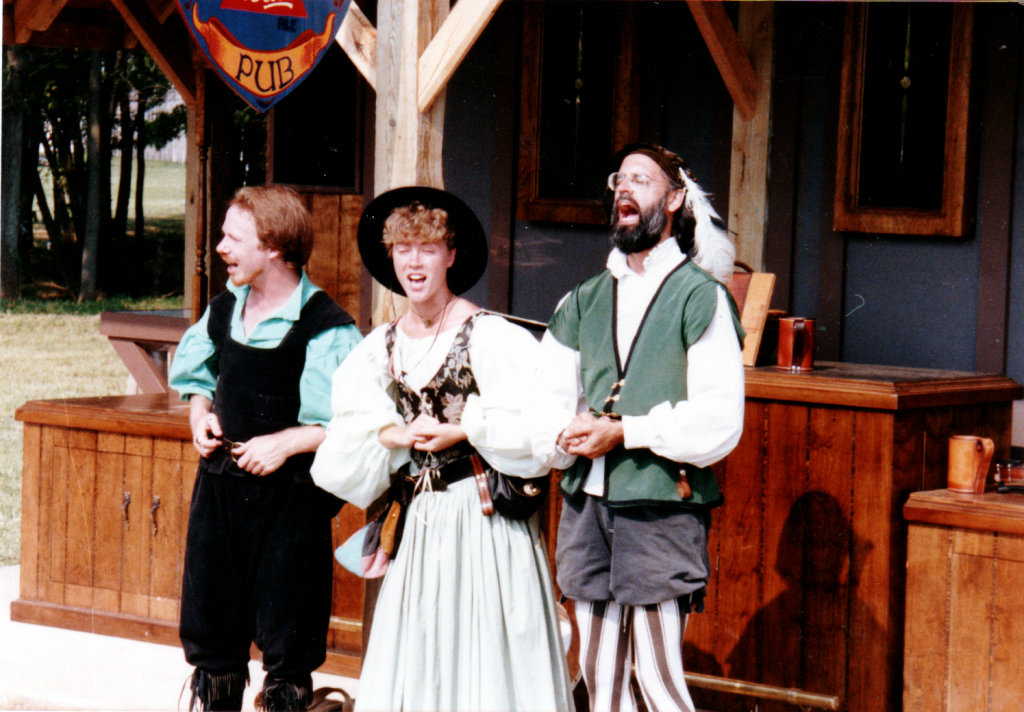 Another pub stage - this time at the Ohio Renaissance Festival. This would have been late August of 1992. It was very hot and we were facing the sun - one of the most miserable shows I can remember. (The pub show - the faire itself was wonderful!) 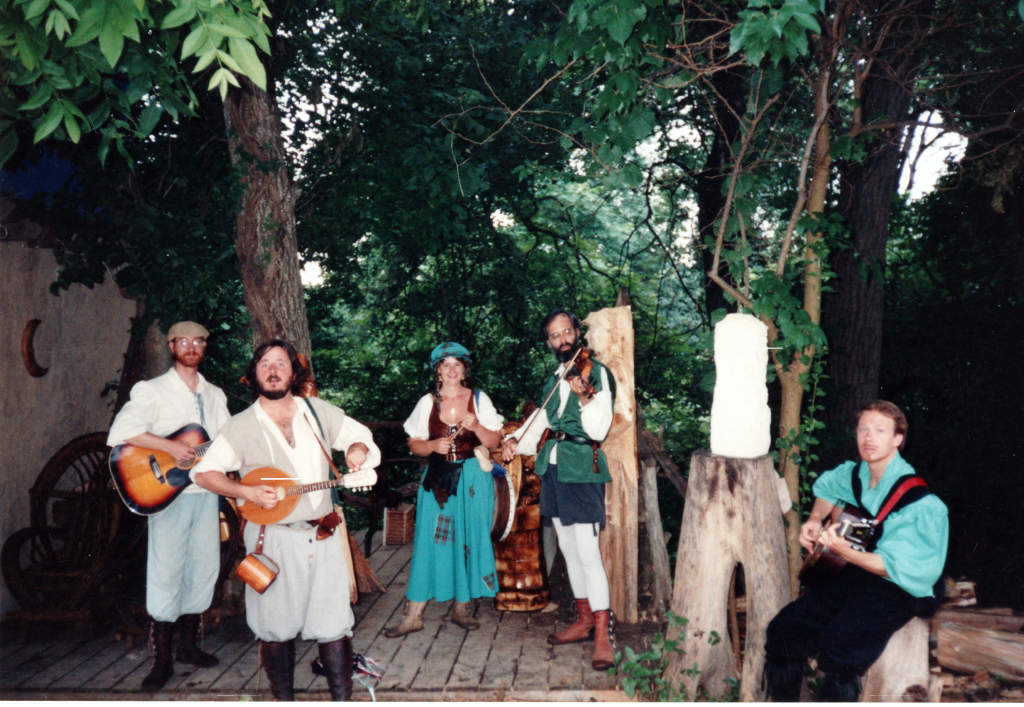 An early warmup with Terry and Three Hams on Rye (minus one) in Dallas in 1991. 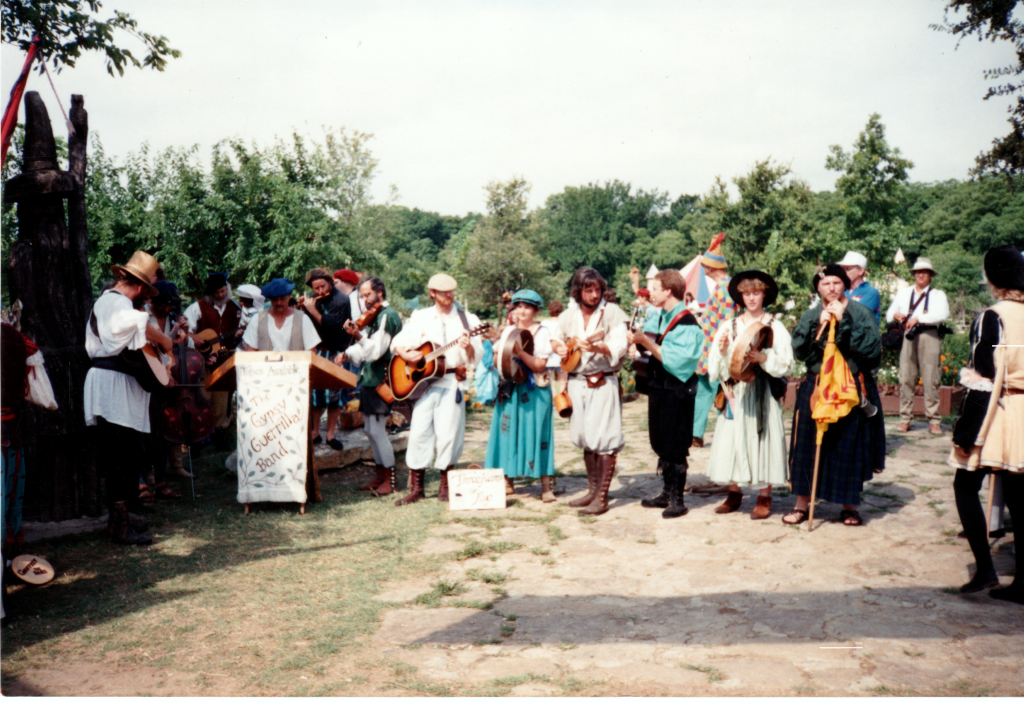 Morning music at Scarborough - about 1991. 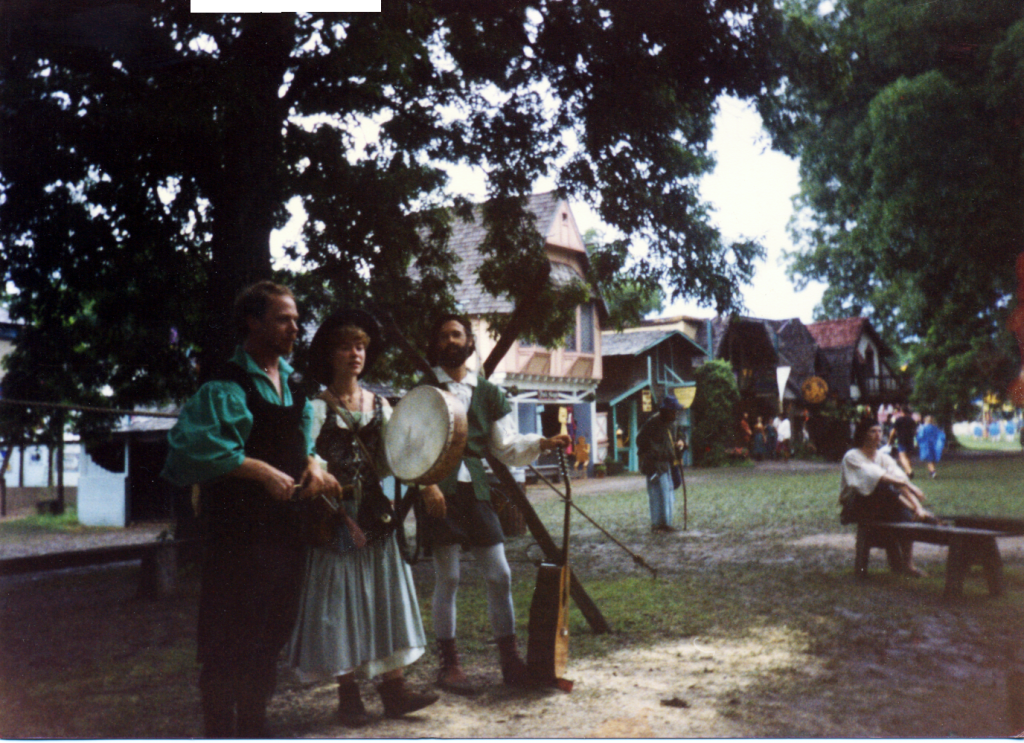 Scarborough - 1990. There was a thunderstorm coming in, and it was getting quite dark, if I remember correctly. 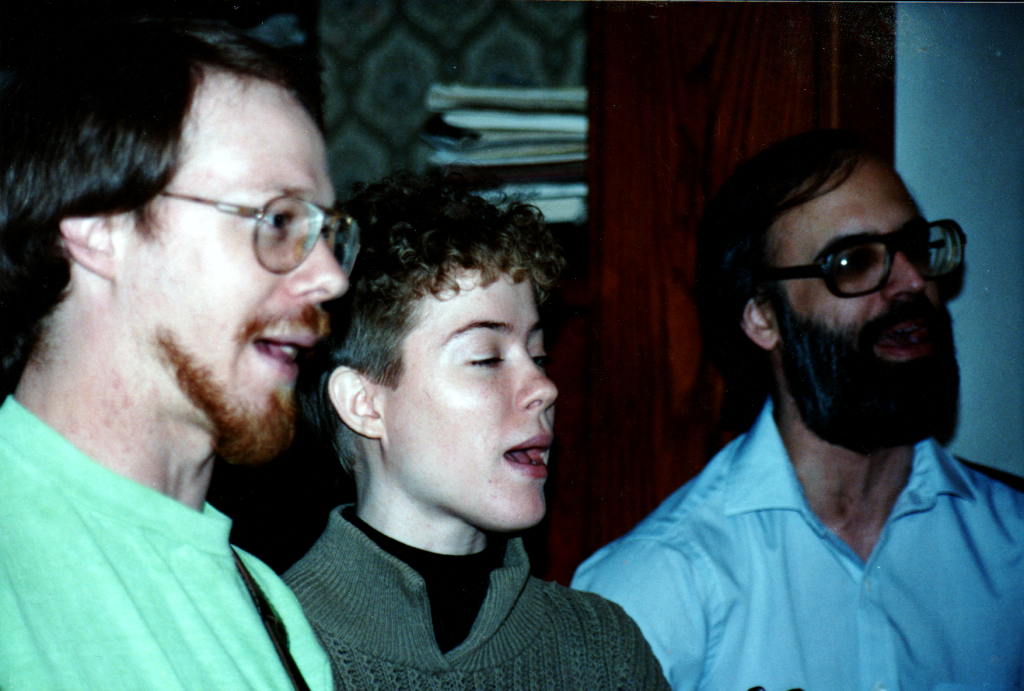 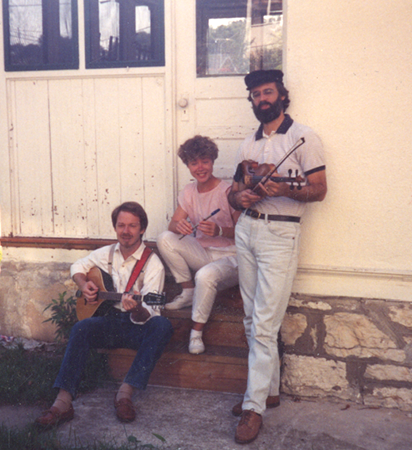 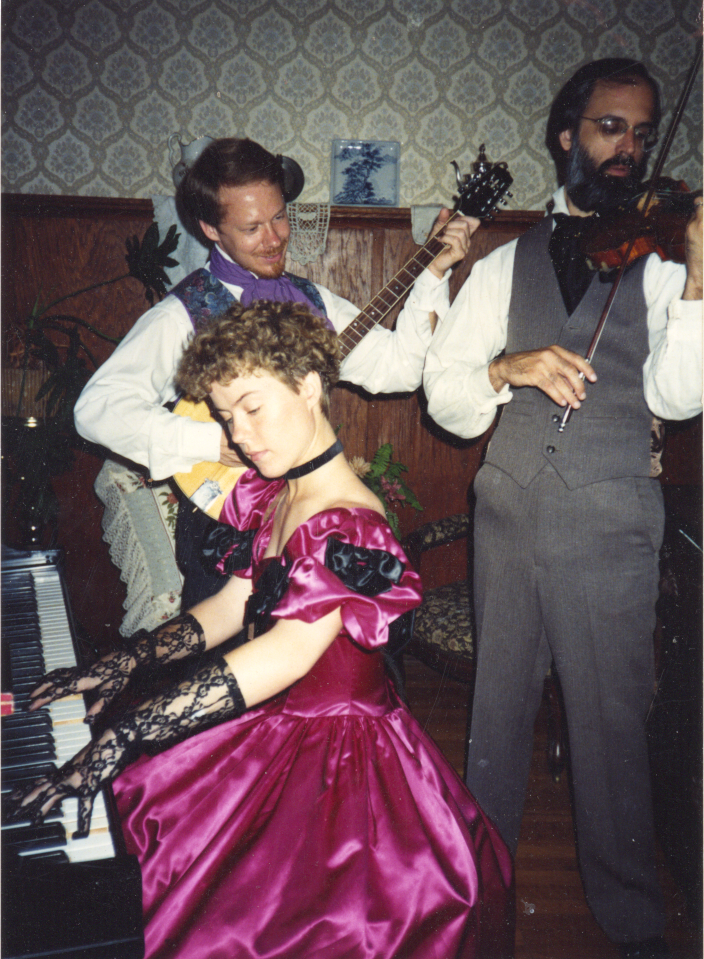 The three of us in Dickensian costume. A publicity photo from our gig at Dickens on the Strand in Galveston, 1992. 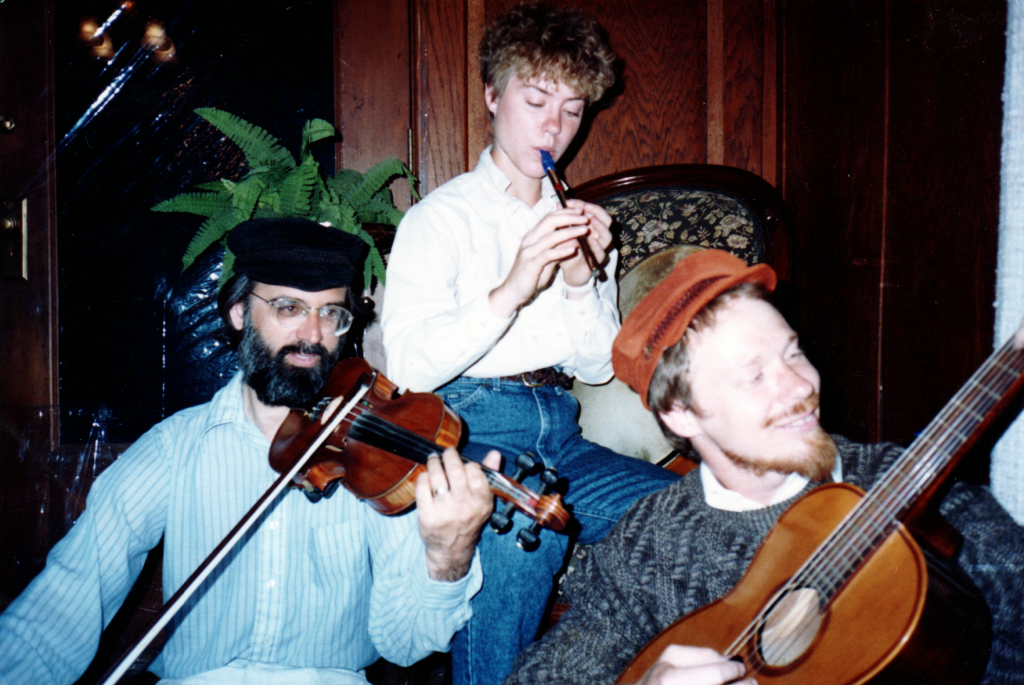 Another publicity photo from 1992. 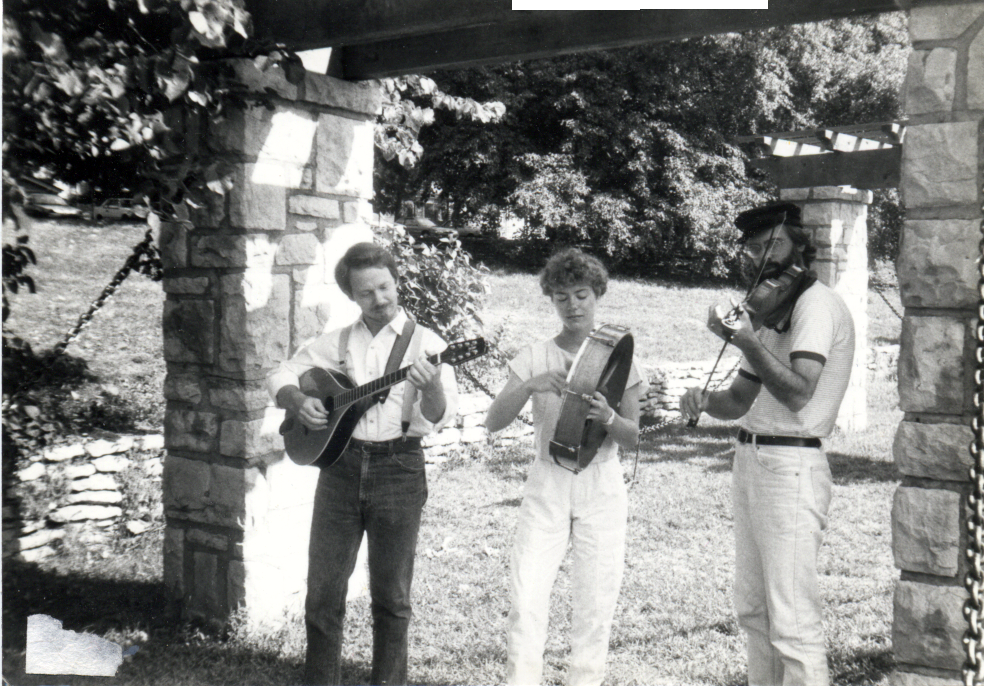 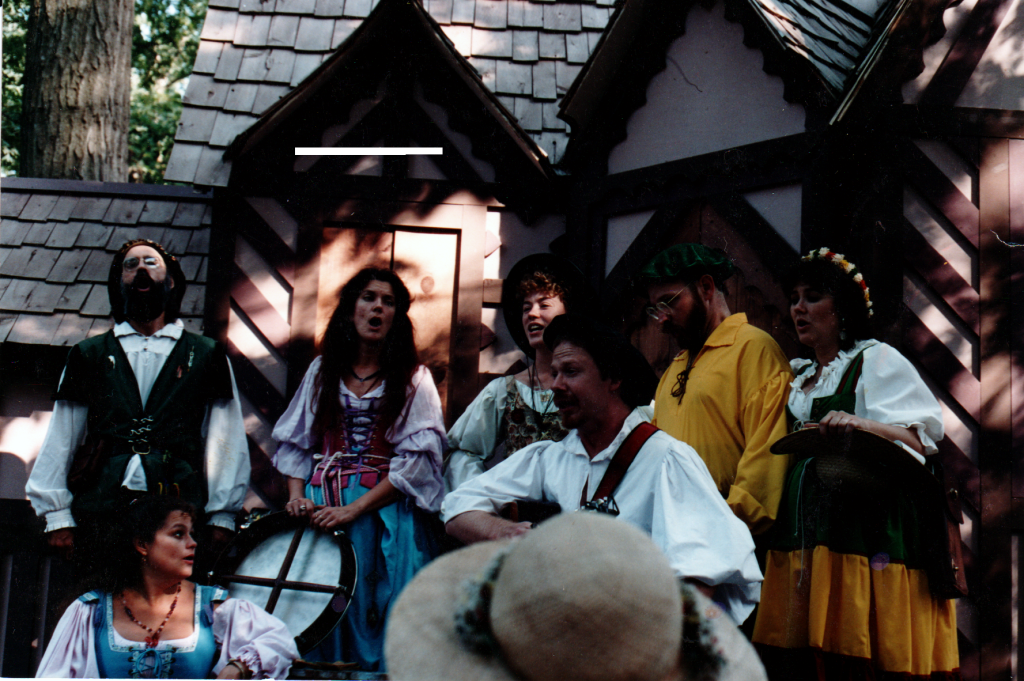 The end of The Hour of Power at the Bristol Renaissance Faire. We performed the Mingulay Boat Song with Betsy Smith and Lolly Foy (Wenchwork) and Brian and Diane Leo (Molly and the Tinker). 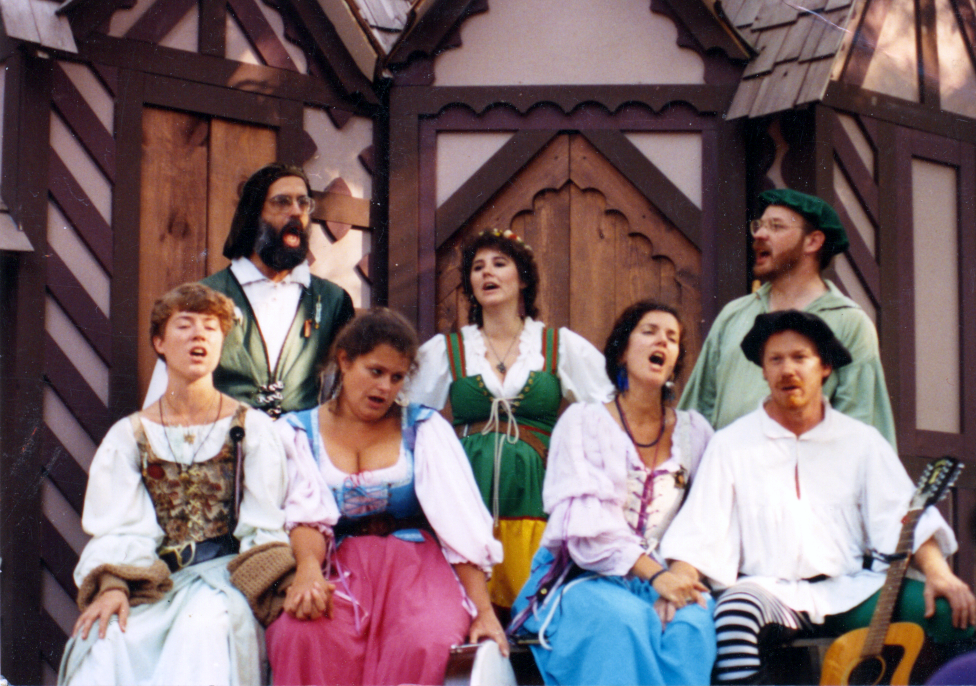 Another Mingulay performance from our first year in Bristol, 1991. This was The Hour of Power. The three groups had back to back shows on the Pub Stage, so we would combine forces for one mighty hour of music.